If you cross the Old Bridge you can not miss this imposing building that proudly overlooks the Tarn: the Ingres Bourdelle Museum

The current Ingres Bourdelle museum occupies the former episcopal palace, which became a town hall after the French Revolution. The building is itself erected on the medieval remains of a first military structure built in the thirteenth century to ensure the protection of the city and to protect the future bridge. In the fourteenth century, Montauban is delivered to the English, the Black Prince (son of the King of England Edward III) then builds a fort remained unfinished after the forced departure of the English.

Real "court of miracles" until 1520, the place is reinvested by the consuls to restore the defensive system of the castle in the face of the threat of religious wars. In 1629, the besieged city surrendered and the castle remained abandoned. It was then that Pierre de Bertier, true "champion" of the Counter-Reformation, decided to establish his new episcopal palace on the ruins of the old fort, high place of the Protestant resistance. His architect Bernard de Campmartin chose to preserve some of the medieval structures and to superimpose an original building composed of a central body and two wings organized around a courtyard closed by a large gate.

After the French Revolution, the palace is confiscated as national property and then auctioned. The city buys it and installs its city hall, which moves in 1908.

It is at the death of Ingres, the establishment takes its identity and its growth: the museum inherits all the workshop works of the famous painter Montalban and takes the name of "Museum Ingres".

After three years of renovation, this museum is entering the 21st century.

Take advantage of your ticket to the Ingres Bourdelle Museum to discover, free of charge, the Victor Brun Museum.

"When the Mona Lisa was in Montauban…" During World War II, in order to protect its many masterpieces, the Louvre Museum sought to dispatch some 3000 works to a place of safekeeping. In 1940, the Montauban Museum became the war time refuge for a very famous painting, The Mona Lisa. 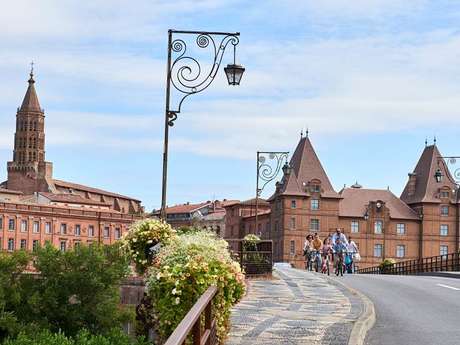 Museum to take away or tasted on site

Download the new application of the museum Ingres Bourdelle

Young audience news at the MIB

All for the family at the new Ingres Bourdelle museum